Difference between revisions of "Manual:CHR"

Cloud Hosted Router (CHR) is a RouterOS version intended for running as a virtual machine. It supports the x86 64-bit architecture and can be used on most of the popular hypervisors such as VMWare, Hyper-V, VirtualBox, KVM and others. CHR has full RouterOS features enabled by default but has a different licensing model than other RouterOS versions.

CHR has been tested on the following platforms:

Note: Minimal requirement is 128MB of RAM to complete the self-installation process.

How to Install CHR

We provide 4 different virtual disk images to choose from:

Note: These are disk images, not virtual machine appliances that can be imported

Note: Since 6.35rc42 extra step of installation on itself is not required

The CHR has 4 license levels:

Perpetual is a lifetime license (buy once, use forever). It is possible to transfer a perpetual license to another CHR instance.

A running CHR instance will indicate the time when it has to access the account server to renew it's license. If the CHR instance will not be able to renew the license it will behave as if the trial period has ran out and will not allow an upgrade of RouterOS to a newer version.

p1 (perpetual-1) license level allows CHR to run indefinitely. It is limited to 1Gbps upload per interface. All the rest of the features provided by CHR are available without restrictions. It is possible to upgrade p1 to p10 or p-unlimited After the upgrade is purchased the former license will become available for later use on your account.

p10 (perpetual-10) license level allows CHR to run indefinitely. It is limited to 10Gbps upload per interface. All the rest of the features provided by CHR are available without restrictions. It is possible to upgrade p10 to p-unlimited After the upgrade is purchased the former license will become available for later use on your account.

The p-unlimited (perpetual-unlimited) license level allows CHR to run indefinitely. It is the highest tier license and it has no enforced limitations.

There are several options to use and try CHR free of charge.

The free license level allows CHR to run indefinitely. It is limited to 1Mbps upload per interface. All the rest of the features provided by CHR are available without restrictions. To use this, all you have to do is download disk image file from our download page and create a virtual guest.

To take advantage of increased data transfer speeds, you will have to have an account registered on MikroTik.com. Then you can request the desired license level for trial from your router that will assign your router ID to your account and enable a purchase of the license from your account. All the paid license equivalents are available for trial. A trial period is 60 days from the day of acquisition.

Upgrade from free to p1 or higher

Initial upgrade from the free tier to anything higher than that incurs CHR instance registration on the account server. To do that you have to enter your MikroTik.com username and password and a desired license level you want to acquire. As a result, a CHR ID number will be assigned to your account on the account server and 60-day trial created for that ID. There are 2 ways to obtain a license - using WinBox or RouterOS command line interface:

Upgrade from higher tier up

Only an upgrade to a higher tier is possible at the moment (for paid licenses only) and that is done in the account server. For changes to take place on the router itself renew command should be issued. When the router already has any kind of trial or paid license, the license level you set for the renew command is not important anymore, it is mandated by the account server. Possible upgrades are as follows:

To acquire a higher level trial, set up a new CHR instance, renew the license and select the desired level.

To upgrade from a Trial license to Paid go to MikroTik.com account server and choose 'all keys' in Cloud Hosted Router (CHR) section: 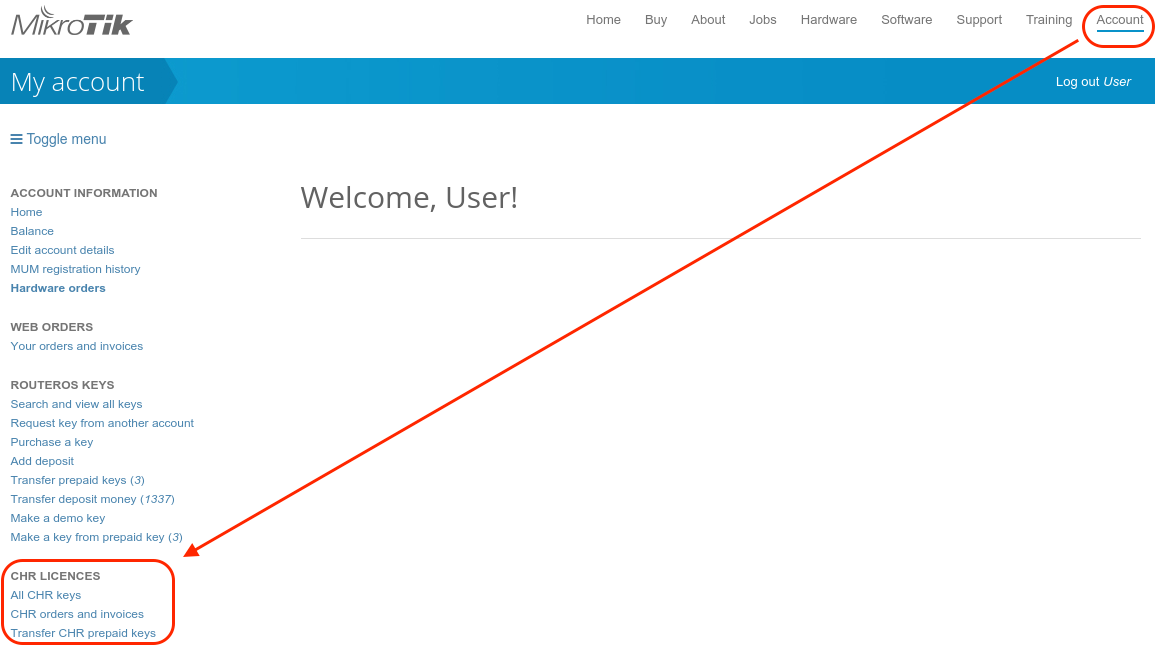 You will be presented with a list of your CHR machines and licenses. To upgrade from a Trial to a Paid license click 'Upgrade' and chose the desired payment method:

In '/system license' menu router will indicate the time next-renewal-at when it will attempt to contact server located on licence.mikrotik.com. Communication attempts will be performed once an hour after the date on next-renewal-at and will not cease until the server responds with an error. If deadline-at date is reached without successfully contacting the account server, the router will consider that license has expired and will disallow further software updates. However, router will continue to work with the same license tier as before.

Packets not passing from guests

The problem: after configuring a software interface (VLAN, EoIP, bridge, etc.) on the guest CHR it stops passing data to the outside world beyond the router.

The solution: check your VMS (Virtualization Management System) security settings, if other MAC addresses allowed to pass if packets with VLAN tags allowed to pass through. Adjust the security settings according to your needs like allowing MAC spoofing or certain MAC address range. For VLAN interfaces, it is usually possible to define allowed VLAN tags or VLAN tag range.