IVL - Independent VLAN learning - learning/lookup is based on both MAC addresses and VLAN IDs.

SVL - Shared VLAN learning - learning/lookup is based on MAC addresses - not on VLAN IDs.

Similarly to other RouterBoards, port switching on CRS allows wire-speed traffic forwarding among a group of ports, like the ports were a regular Ethernet switch. This feature is configurable by setting a "master-port" property to one or more ports in /interface ethernet menu. The "master-port" will be the port through which the RouterOS will communicate to all ports in the group. Interfaces which have the "master-port" specified become isolated - no traffic can be received and no traffic can be sent out directly from RouterOS.

Here is a general diagram of RouterBoard with a five port switch chip:

A packet that is received by one of the ports always passes through the switch logic first. Switch logic decides to which ports the packet should be going to. Passing packet "up" or giving it to RouterOS is also called sending it to switch chip's “CPU” port. It means at that point switch forwards the packet to CPU port the packet starts to get processed by RouterOS as incoming packet of the “master-port”. If the packet does not have to go to “CPU” port, it is handled entirely by switch logic, does not require any CPU resources and happen at wire-speed.

For example, consider a CRS125 switch with 24 Ethernet interfaces and 1 SFP interface:

Ports ether1, ether7-ether12 are not switched in this example, they remain as independent router ports.

Note: Previously a link was detected only on interfaces with a physical connection, but now since the ether2, ether13 and ether21 have connection to CPU, the running flag is propagated to them, as well.

In essence this configuration is the same as if you had a RouterBoard with 10 Ethernet interfaces and 3 switches: 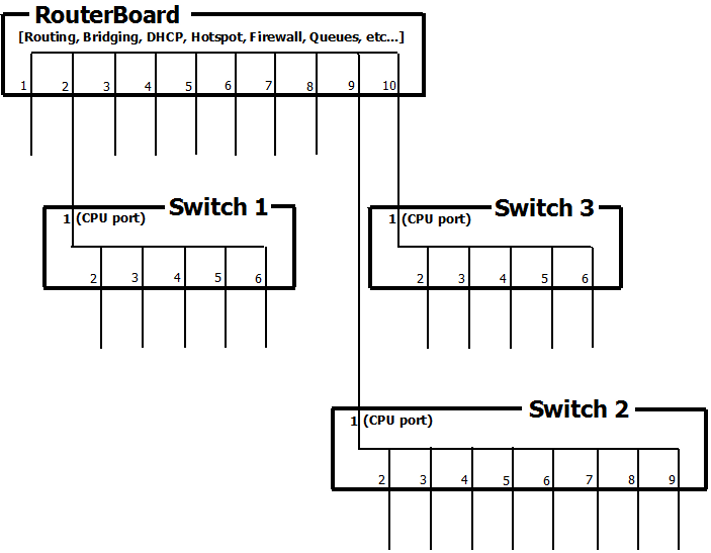 The unicast forwarding database supports up to 16318 MAC entries.

CRS125 switch-chip supports up to 1024 entries in MFDB for multicast forwarding. For each multicast packet, destination MAC or destination IP lookup is performed in MFDB. MFDB entries are not automatically learnt and can only be configured.

The VLAN table supports 4096 VLAN entries for storing VLAN member information as well as other VLAN information such as QoS, isolation, forced VLAN, learning, and mirroring.

Protocol Based VLAN table is used to assign VID and QoS attributes to related protocol packet per port.

MAC Based VLAN table is used to assign VLAN based on source MAC.

applied to the ingress packets.

is applied to the egress packets.

Port leakage allows bypassing egress VLAN filtering on the port. Leaky port is allowed to access other ports for various applications such as security, network control and management. Note: When both isolation and leakage is applied to the same port, the port is isolated.

The Trunking in the Cloud Router Switches provides IEEE802.3ad and IEEE802.1ax compliant link aggregation with hardware automatic failover and load balancing. Up to 8 Trunk groups are supported with up to 8 Trunk member ports per Trunk group.

Traffic shaping restricts the rate and burst size of the flow which is transmitted out from the interface. The shaper is implemented by a token bucket. If the packet exceeds the maximum rate or the burst size, which means no enough token for the packet, the packet is stored to buffer until there is enough token to transmit it.

The global DSCP to QOS mapping table is used for mapping from DSCP of the packet to new QoS attributes configured in the table.

The global DSCP to DSCP mapping table is used for mapping from the packet's original DSCP to new DSCP value configured in the table.