Difference between revisions of "Manual:IP/Fasttrack"

Note that not all packets in a connection can be FastTracked, so it is likely to see some packets going through slow path even though connection is marked for FastTrack. This is the reason why fasttrack-connection is usually followed by identical action=accept rule. FastTracked packets bypass firewall, connection tracking, simple queues, queue tree with parent=global, (restriction removed in 6.33), IP accounting, IPSec, hotspot universal client, VRF assignment, so it is up to administrator to make sure FastTrack does not interfere with other configuration;

IPv4 FastTrack is active if following conditions are met:

FastTrack is supported on the listed devices.

For example, in home routers with factory default configuration, you could FastTrack all LAN traffic with this one rule placed at the top of the Firewall Filter. The same configuration accept rule is required:

View of simple FastTrack rules in the firewall, it is important to have other filter or mangle rules to get the advantage of the FastTrack:

Warning: Queues (except Queue Trees parented to interfaces), firewall filter and mangle rules will not be applied for FastTracked traffic.

FastTrack is enabled on RB2011 at chain=forward with the rule from previous example. Bandwidth test with single TCP stream is sent, 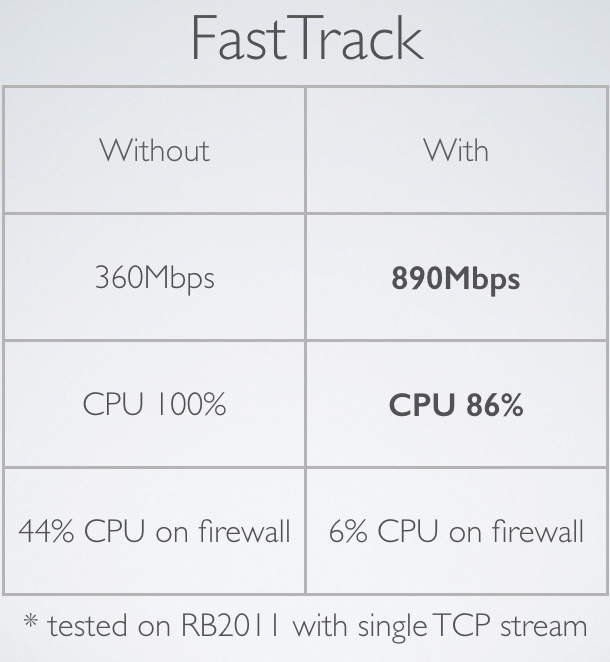