Difference between revisions of "Manual:Interface/Bridge"

Ethernet-like networks (Ethernet, Ethernet over IP, IEEE802.11 in ap-bridge or bridge mode, WDS, VLAN) can be connected together using MAC bridges. The bridge feature allows the interconnection of hosts connected to separate LANs (using EoIP, geographically distributed networks can be bridged as well if any kind of IP network interconnection exists between them) as if they were attached to a single LAN. As bridges are transparent, they do not appear in traceroute list, and no utility can make a distinction between a host working in one LAN and a host working in another LAN if these LANs are bridged (depending on the way the LANs are interconnected, latency and data rate between hosts may vary).

Network loops may emerge (intentionally or not) in complex topologies. Without any special treatment, loops would prevent network from functioning normally, as they would lead to avalanche-like packet multiplication. Each bridge runs an algorithm which calculates how the loop can be prevented. STP and RSTP allows bridges to communicate with each other, so they can negotiate a loop free topology. All other alternative connections that would otherwise form loops, are put to standby, so that should the main connection fail, another connection could take its place. This algorithm exchange configuration messages (BPDU - Bridge Protocol Data Unit) periodically, so that all bridges would be updated with the newest information about changes in network topology. (R)STP selects root bridge which is responosible for network reconfiguration, such as blocking and opening ports of the other bridges. The root bridge is the bridge with lowest bridge ID.

(R)STP eliminate the possibility for the same MAC addresses to be seen on multiple bridge ports by disabling secondary ports to that MAC address. 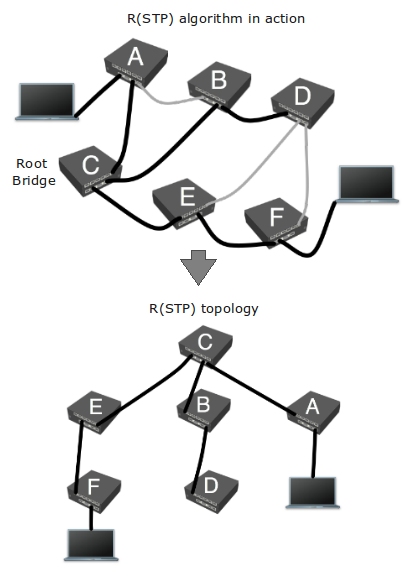 To add and enable a bridge interface that will forward all the protocols:

Port submenu is used to enslave interfaces in a particular bridge interface.

To group ether1 and ether2 in the already created bridge1 bridge

Used to monitor the current status of a bridge.

To monitor a bridge:

Statistics of an interface that belongs to a bridge.

To monitor a bridge port:

To get the active host table:

The bridge firewall implements packet filtering and thereby provides security functions that are used to manage data flow to, from and through bridge.

There are two bridge firewall tables:

This section describes bridge NAT options, which were omitted in the general firewall description.