Difference between revisions of "Manual:Interface/PPPoE"

The PPPoE (Point to Point Protocol over Ethernet) protocol provides extensive user management, network management and accounting benefits to ISPs and network administrators. Currently PPPoE is used mainly by ISPs to control client connections for xDSL and cable modems as well as plain Ethernet networks. PPPoE is an extension of the standard Point to Point Protocol (PPP). The difference between them is expressed in transport method: PPPoE employs Ethernet instead of serial modem connection.

Note that when RADIUS server is authenticating a user with CHAP, MS-CHAPv1 or MS-CHAPv2, the RADIUS protocol does not use shared secret, it is used only in authentication reply. So if you have a wrong shared secret, RADIUS server will accept the request. You can use /radius monitor command to see bad-replies parameter. This value should increase whenever a client tries to connect.

To configure MikroTik RouterOS to be a PPPoE client, just add a pppoe-client:

To configure MikroTik RouterOS to be an Access Concentrator (PPPoE Server): 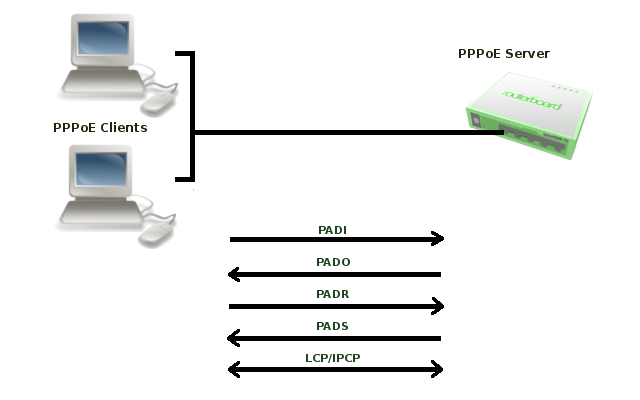 When server receives PADI frame, it responds with PADO frame to Client's unicast Ethernet address. There can be more than one server in broadcast range of the client. In such case client collects PADO frames and picks one (in most cases it picks the server which responds first) to start session.

Client sends PADR frame to unicast Ethernet address of the server it chose. If server agrees to set up a session with this particular client, it allocates resources to set up PPP session and assigns Session ID number. This number is sent back to client in PADS frame. When client receives PADS frame, it knows servers mac address and Session ID, it allocates resources and session can begin.

Typically, the largest Ethernet frame that can be transmitted without fragmentation is 1500 bytes. PPPoE adds another 6 bytes of overhead and PPP field adds two more bytes, leaving 1492 bytes for IP datagram. Therefore max PPPoE MRU and MTU values must not be larger than 1492.

TCP stacks try to avoid fragmentation, so they use an MSS (Maximum Segment Size). By default MSS is chosen as MTU of the outgoing interface minus the usual size of the TCP and IP headers (40 bytes), which results in 1460 bytes for an Ethernet interface. Unfortunately there may be intermediate links with lower MTU which will cause fragmentation. In such case TCP stack performs path MTU discovery. Routers which cannot forward the datagram without fragmentation are supposed to drop packet and send ICMP-Fragmentation-Required to originating host. When host receives such ICMP packet, it tries to lower the MTU. This should work in the ideal world, however in the real world many routers do not generate fragmentation-required datagrams, also many firewalls drop all ICMP datagrams.

The workaround for this problem is to adjust MSS if it is too big. By default RouterOS adds mangle rules to intercept TCP SYN packets and silently adjust any advertised MSS option so they will be appropriate for the PPPoE link.

Starting from v3.21 RouterOS has new tool - PPPoE Scanner. It allows you to scan all active PPPoE servers in broadcast domain. Command to run scanner is as follows /interface pppoe-client scan <interface>

Note for Windows. Some connection instructions may use the form where the "phone number", such as "MikroTik_AC\mt1", is specified to indicate that "MikroTik_AC" is the access concentrator name and "mt1" is the service name.

Specifying MRRU means enabling MP (Multilink PPP) over single link. This protocol is used to split big packets into smaller ones. Under Windows it can be enabled in Networking tab, Settings button, "Negotiate multi-link for single link connections". MRRU is hardcoded to 1614 on Windows. This setting is useful to overcome PathMTU discovery failures. The MP setting should be enabled on both peers.

To add and enable PPPoE client on the ether1 interface connecting to the AC that provides 'testSN' service using user name user with the password 'passwd':

The PPPoE server (access concentrator) supports multiple servers for each interface - with differing service names. Currently the throughput of the PPPoE server has been tested to 160 Mb/s on a Celeron 600 CPU. Using higher speed CPUs, throughput should increase proportionately.

Note that if no service name is specified in WindowsXP, it will only use a service with no name! So if you want to serve WindowsXP clients, leave your service name empty.

The default keepalive-timeout value of 10s is OK in most cases. If you set it to 0, the router will not disconnect clients until they explicitly log out or the router is restarted. To resolve this problem, the one-session-per-host property can be used.

Note: Security issue: do not assign an IP address to the interface you will be receiving the PPPoE requests on.

Specifying MRRU means enabling MP (Multilink PPP) over a single link. This protocol is used to split big packets into smaller ones. Under Windows it can be enabled in Networking tag, Settings button, "Negotiate multi-link for single link connections". Their MRRU is hardcoded to 1614. This setting is useful to overcome PathMTU discovery failures. The MP setting should be enabled on both peers.

To add PPPoE server on ether1 interface provided with a service-name of "ex" and allowing only one connection per host:

There are two types of interface (tunnel) items in PPTP server configuration - static users and dynamic connections. An interface is created for each tunnel established to the given server. Static interfaces are added administratively if there is a need to reference the particular interface name (in firewall rules or elsewhere) created for the particular user. Dynamic interfaces are added to this list automatically whenever a user is connected and its username does not match any existing static entry (or in case the entry is active already, as there can not be two separate tunnel interfaces referenced by the same name - set one-session-per-host value if this is a problem). Dynamic interfaces appear when a user connects and disappear once the user disconnects, so it is impossible to reference the tunnel created for that use in router configuration (for example, in firewall), so if you need a persistent rules for that user, create a static entry for him/her. Otherwise it is safe to use dynamic configuration. Note that in both cases PPP users must be configured properly - static entries do not replace PPP configuration.

To view the currently connected users:

To disconnect the user ex:

In a wireless network, the PPPoE server may be attached to an Access Point (as well as to a regular station of wireless infrastructure). Either our RouterOS client or Windows PPPoE clients may connect to the Access Point for PPPoE authentication. Further, for RouterOS clients, the radio interface may be set to MTU 1600 so that the PPPoE interface may be set to MTU 1500. This optimizes the transmission of 1500 byte packets and avoids any problems associated with MTUs lower than 1500. It is not discussed here, how to change the MTU of the Windows wireless interface.

Let us consider the following setup where the MikroTik Wireless AP offers wireless clients transparent access to the local network with authentication: 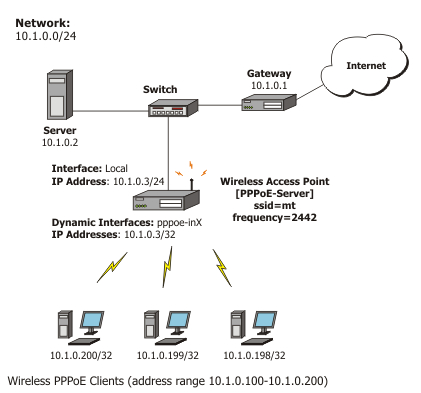 First of all, the wireless interface should be configured:

We should add PPPoE server to the wireless interface:

Finally, we can set up PPPoE clients:

We have now completed the configuration and added two users: w and l who are able to connect to Internet, using PPPoE client software.

Note that Windows XP built-in client supports encryption, but RASPPPOE does not. So, if it is planned to support Windows clients older than Windows XP, it is recommended not to require encryption. In either case, the server is able to support clients that cannot encrypt the data.

Make sure that you have specified a valid DNS server in the router (in /ip dns or in /ppp profile the dns-server parameter).

Set the keepalive-timeout parameter (in the PPPoE server configuration) to 10 if you want clients to be considered logged off if they do not respond for 10 seconds.

Note that if the keepalive-timeout parameter is set to 0 and the only-one parameter (in PPP profile settings) is set to 'yes' then the clients may be able to connect only the once. To resolve this problem one-session-per-host parameter in PPPoE server configuration should be set to 'yes'

You have to specify the "Service Name" in the properties of the XP PPPoE client. If the service name is not set, or it does not match the service name of the MikroTik PPPoE server, you get the "line is busy" errors, or the system shows "verifying password - unknown error"