From MikroTik Wiki
Revision as of 15:04, 6 March 2018 by Arturszon (talk | contribs) (→‎Problem)
(diff) ← Older revision | Latest revision (diff) | Newer revision → (diff)
Jump to navigation Jump to search
The printable version is no longer supported and may have rendering errors. Please update your browser bookmarks and please use the default browser print function instead. 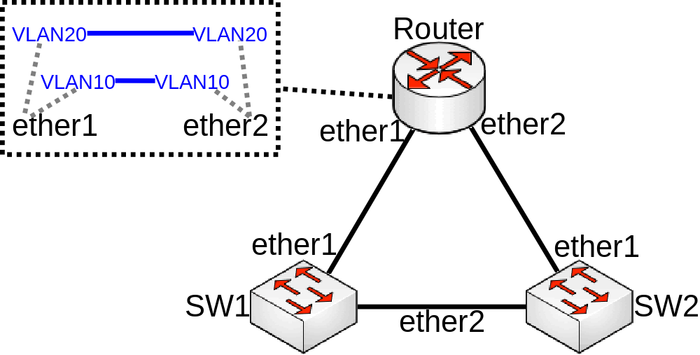 You might notice that the network is having some weird delays or even the network is unresponsive, you might notice that there is a loop detected (packet received with own MAC address) and some traffic is being generated out of nowhere. The problem occurs because a broadcast packet that is coming from either one of the VLAN interface created on the Router will be sent out the physical interface, packet will be forwarded through the physical interface, through a switch and will be received back on a different physical interface, in this case broadcast packets sent out ether1_v10 will be received on ether2, packet will be captured by ether2_v10, which is bridged with ether1_v10 and will get forwarded again the same path (loop). (R)STP might not always detect this loop since (R)STP is not aware of any VLANs, a loop does not exist with untagged traffic, but exists with tagged traffic. In this scenario it is quite obvious to spot the loop, but in more complex setups it is not always easy to detect the network design flaw. Sometimes this network design flaw might get unnoticed for a very long time if your network does not use broadcast traffic, usually Nieghbor Discovery Protocol is broadcasting packets from the VLAN interface and will usually trigger a loop detection in such a setup. Sometimes it is useful to capture the packet that triggered a loop detection, this can by using sniffer and analysing the packet capture file:

One solution is to use Multiple Spanning Tree Protocol across the whole network, but it is recommended to use bridge VLAN filtering instead to make all bridges compatible with IEEE 802.1W.