Difference between revisions of "Manual:Metarouter"

MetaRouter is a new feature in RouterOS 4.0 beta 1 and RouterOS v3.21

Currently MetaRouter can be used on

Each Metarouter instance uses the same amount of resources as a stand-alone RouterOS installation. It means that you need a minimum of 24MB of RAM for each RouterOS virtual machine plus memory for the MetaROUTER host itself. It is suggested to have more than 24MB memory available for each Metarouter. Upcoming RouterOS versions will have ability to run virtual machines with less than 16MB per machine.

Note: It is possible to run other virtual machines with less than 24MB RAM per machine if the virtual operating system is OpenWRT. The 24MB limitation is only for virtual RouterOS installations.

Also it is not possible to use external storage devices (Store) in the metarouter virtual devices.

Where it can be used?

The MetaRouter function is useful for allowing clients or lower-privilege users access to their own 'router' and config to configure as they like, without the need for a complete second router, or giving them access to the main router configuration.

For example; a WISP can create a virtual router for the clients ethernet port allowing them to define their own firewall settings, while leaving the WISP's wireless settings untouched.

As you can see, creating virtual router is quite easy, you just have to specify name of the router, how much RAM will be allocated for it and disk size that will be used by virtual router. Explanations of all other properties are available in reference manual.

Note: * be careful when using dynamic HDD size for metarouters, a proxy could fill up all your hosts storage!

Example with no settings

If you will add a new metarouter without specifying any parameters, it will be added with Dynamic HDD size, and 16MiB of RAM:

Starting from v3.24 and v4.0beta3 MetaROUTER has the ability to import custom built images. As an example we will show how to patch and use OpenWRT as the virtual machine.

If you don't have any specific needs, you can import our prebuilt OpenWRT image, which is downloadable MIPS image, PPC image. Upload openwrt image to the router and import it by import-image command:

As you can see OpenWRT is running, now you can start configuration process, which is explained in sections below.

Building your own OpenWRT image

If you are not satisfied with our prebuilt version of OpenWRT, then you can build and use your own image.

First step is to install svn and get the latest source code from openwrt.org

Note: Patch 1.2 was made against older kernel then in current trunk and some extra steps should be taken to apply it to OpenWRT. For example r29684 can be used without modifications

Now you have to patch downloaded source with our patch

When source is patched, you have to set up configuration options 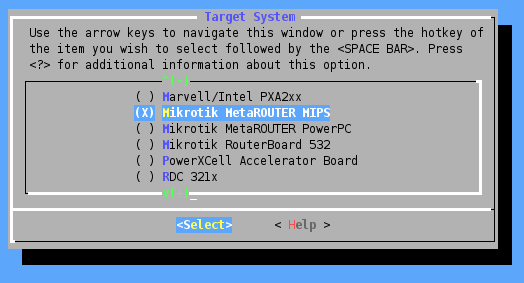 Other options depends on what is your requirements (include for example IPv6 and ppp support or not), you can also stick with defaults.

If you see any error messages while trying to launch menuconfig, like

When you are done with build configuration, type

It will take a while to build everything so you can go and have a cup of tea.

After the build process is done, upload newly built image to the router and import it as described in section above.

Warning: On newer GCC versions you may be required to add this patch from OpenWRT [1]

For more options and build instructions look in OpenWRT's documentation

First, you need to add a new interface to your virtual router. This is done in the interface menu.

The interface command has the following options:

Description of each option can be found in reference manual.

On the host physical router the interface appears as a virtual interface:

Connecting to the virtual machine

To connect to your virtual machine, use the console command:

You will see your newly added virtual interface here:

To disconnect from the metarouter virtual machine console, hit CTRL + A and then Q to Quit back to your Host console (if you are using minicom, hit CTRL + A twice):

This Example will show how to use Metarouter feature to create a isolated router on top of the WISP client site router. The setup for the example is shown on the diagram below:

1. Adding a Metarouter for client:

3. Creating a Bridge Interface for bridging metarouter interface together with ethernet interface where the client is physically connected:

4. Adding IP configuration for the new Metarouter interface which will be used for connecting between Metarouter and Metarouter Host system:

5. Connecting to Metarouter using the Console

6. Configuring Metarouter to make it easy for client to understand the configuration:

Issue has been resolved in RouterOS 6.x

Only listed routers are affected: RB1100AH

This problem is resolved in 5.12 and later RouterOS releases. If you are using a newer release and still encounter the problem on the router you have to reinstall the router using Netinstall tool.

RouterBOARD RB1100AHx2 reports similar message, but MetaROUTER feature is not currently supported on this router.

All other routers form this architecture that support MetaROUTER feature are not affected.

Other issues that do not fit the description most probably are caused by RouterOS misconfiguration and do not have a common denominator and have to be checked case by case.