Basically the hosts table represents switch chips internal mac address to port mapping. It can contain two kinds of entries: dynamic and static. Dynamic entries get added automatically, this is also called a learning process: when switch chip receives a packet from certain port, it adds the packets source mac address X and port it received the packet from to host table, so when a packet comes in with destination mac address X it knows to which port it should forward the packet. If the destination mac address is not present in host table then it forwards the packet to all ports in the group. Dynamic entries take about 5 minutes to time out. Learning is enabled only on ports that are configured as part of switch group. So you won't see dynamic entries if you have not set up port switching. Also you can add static entries that take over dynamic if dynamic entry with same mac-address already exists. Also by adding a static entry you get access to some more functionality that is controlled via following params:

VLAN table specifies certain forwarding rules for packets that have specific 802.1Q tag. Those rules are of higher priority than switch groups configured using the Bridge Hardware Offloading feature. Basically the table contains entries that map specific VLAN tag ids to a group of one or more ports. Packets with VLAN tags leave switch chip through one or more ports that are set in corresponding table entry. The exact logic that controls how packets with VLAN tags are treated is controlled by vlan-mode parameter that is changeable per switch port in /interface ethernet switch port menu. Vlan-mode can take following values:

VLAN tag id based forwarding takes into account the MAC addresses dynamically learned or manually added in the host table. QCA8337 and Atheros8327 switch-chips also support Independent VLAN learning (IVL) which does the learning based on both MAC addresses and VLAN IDs thus allowing the same MAC to be used in multiple VLANs. The option "independent-learning" in VLAN table entries enables this feature. 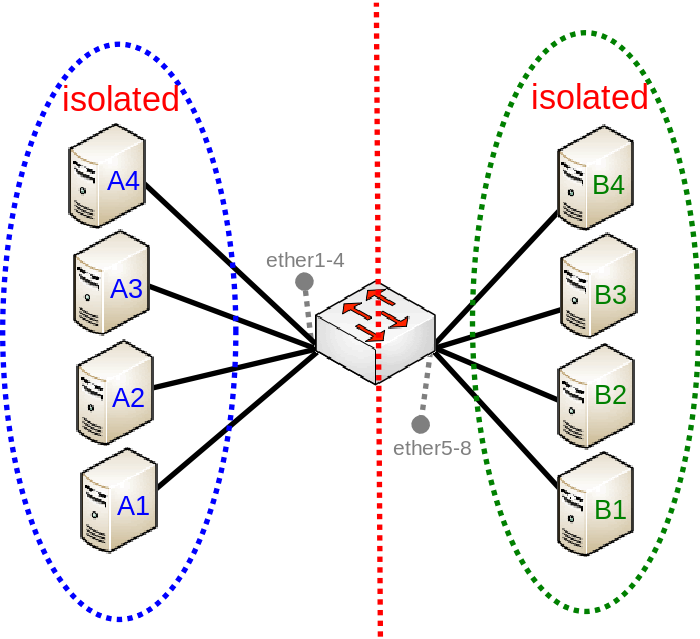 In order to make the device accessible only from a certain VLAN, you need to create a new VLAN interface on the bridge interface and assign an IP address to it: