MPLS RSVP TE is based on RSVP protocol with extensions introduced by RFC 3209 that adds support for explicit route and label exchange.

RSVP TE tunnels can be established with number of path options:

RSVP TE tunnel head-end appears as interface in RouterOS. Note that RSVP TE tunnels are unidirectional - it is not necessary to have matching tunnel for reverse direction on tail-end router. When tail-end router receives data sent over tunnel, it either receives it with TE tunnel label stripped off by penultimate hop (non-default behaviour) or with explicit-null label, which gets stripped and packet is further inspected (if tunnel label is last label in stack, packet gets routed, otherwise it is processed based on next label in stack, for example, as VPLS packet). Bidirectional tunnel can be simulated by creating one tunnel in one direction and other in other direction between the same endpoints. Still no data will be accounted as received over TE tunnel, as in reality both tunnels are unrelated.

One way to forward traffic onto tunnel is to use routing, but this limits TE tunnel to be used only for routing IP packets.

Additionally, several types of traffic can be forwarded onto TE tunnel automatically, if it is known to be destined to the endpoint of tunnel and if tunnel is active:

For example, for IP BGP route having BGP NextHop x.x.x.x, forwarding method will be chosen according to the following rules:

In similar way, if remote address of VPLS pseudowire is x.x.x.x, forwarding method will be chosen in the following order:

Note that RSVP TE tunnels as a way to establish LSPs can be used together with LDP. Using RSVP TE does not replace or disable LDP, but LSP established by TE is usually preferred over one established using LDP.

Consider the same network as used for LDP signaled VPLS example in MPLSVPLS: 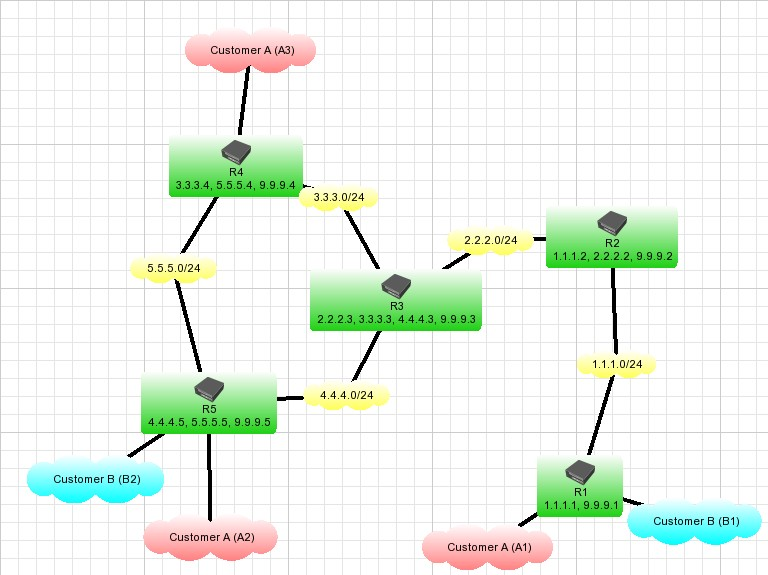 Customer A wants to establish IP VPN between his 3 sites and Customer B wants to transparent connection for ethernet segments at his sites.