Difference between revisions of "Manual:User Manager"

User manager (UM) is a management system that can be used in various setups. UM can be used for HotSpot, PPP, DHCP, Wireless and RouterOS users. User Manager is a RADIUS server application. The first UM test package was introduced in RouterOS version 4. User manager package is supported on all RouterOS architectures including x86 and Cloud Host Router.

Note: SMIPS based devices without additional memory do not have enough free space for UM package.

MikroTik User Manager can be downloaded from the MikroTik web site download section. In there find the system and software version that you need this package for and download Extra packages archive for it. In this archive, you will find the User Manager package. To install the package simply upload it on the device and reboot the unit.

A default Customer with login admin and empty password is created when the User Manager package is installed for the first time.

After that, you can use print command to see what you have added.

Customers use a web interface to manage users, credits, routers, etc. Each customer can have a zero or more sub-customers and exactly one parent-customer with the same or weaker permission level than its parent.

Subscriber is a customer with owner permissions who's a parent is himself. Subscribers can be thought as domain - each subscriber sees everything that happens with his sub-customers, credits, users, routers, sessions, etc., but has no access to other subscriber's data. All data objects (users, routers, credits, logs) belong to one specific subscriber and can, therefore, belong to many sub-customers of the owner subscriber. To separate users among customers of one subscriber, user prefix is used.

A WEB interface provides the same options as CLI. Usually, people choose to use "User managers" WEB interface, because it is more transparent and comfortable to manage. 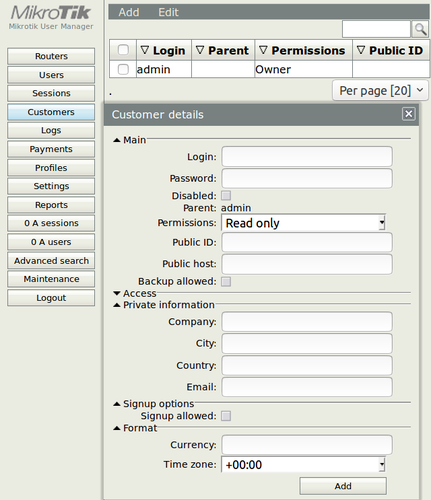 Customer section in the WEB inteface

Users are people who use services provided by customers and each user can have time, traffic and speed limitations. Customers can create, modify and delete users but the owner is the subscriber who is also the owner of these customers. To separate users among customers of one subscriber, user prefix is used.

Profiles can be assigned to users manually or allocated by the user when they make a successful payment.

If there is already one active profile when a user logs on, this profile is used instead of starting the next one (if one is available).

Only one profile (for the same user) can be active at a time.

The last profile of a user can be removed by customer only if it is inactive.

Validity If the 'Starts' value is set to 'At first logon', then the Validity value starts counting. E.g. If Validity is set to 1d, then 1 day after the first logon, regardless if the user has used all their online time or not, the profile will become invalid and they will be unable to log on again unless a new profile is available in their list of valid profiles.

Note: If the 'Starts' value is set to 'At first logon', then the Validity value starts counting. E.g. If Validity is set to 1d, then 1 day after the first logon, regardless if the user has used all their online time or not, the profile will become invalid and they will be unable to log on again unless a new profile is available in their list of valid profiles.

In this subsection, you can configure upload/download limitations including bursts.

In this subsection, you can configure various limitations, for example, time range and weekdays when limitations are active.

This submenu allows for adding routers.

This subsection allows overviewing any changes confirmed in UM database. Some of them can be reverted back.

Logs are written when Authorization (auth) or Accounting (acct) requests from routers are received.

A session refers to a period when a user is using customer's services. It has nothing to do with User Manager web-page sessions. Flags: A - active

To access User managers Web interface type IP address and /Userman at the end of it, for example, http://192.168.88.1/userman 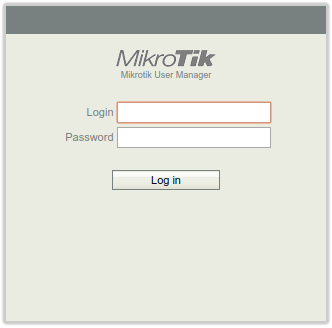 Note: Since RouterOS 4.1, User-manager web interface is unreachable with an HTTP 404 when attempting to navigate to http://inside_ip/userman from behind a Hotspot interface where inside_ip is a non-NAT'd IP address on the router. Two workarounds: change the 'www' service port from 80 to something other than 80 or 8080, such as port 81. Then use http://inside_ip:81/userman, or use an IP address hotspot users are NAT'd to (http://outside_ip/userman) instead.

We will configure PPPoE with the RADIUS server authentication on the following setup: 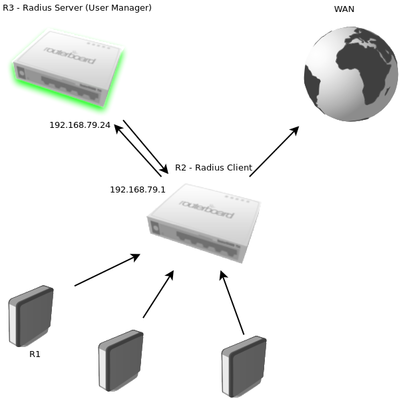 On the client's (R1) router we configure PPPoE-client:

There are 2 ways how to assign IP address for the PPPoE-client:

Create a new one or update the default ppp profile:

Enable user authentication via RADIUS. If entry in local secret database is not found, then client will be authenticated via RADIUS

Create your own or use by default already created Customer:

Create a profile which you will asing to user. can consist only a name (additional parameters can be updated later)

Add a user which will authenificate through the RADIUS server. Previously mentioned static IP address should be configured in this sub-section under ip-address= parameter.