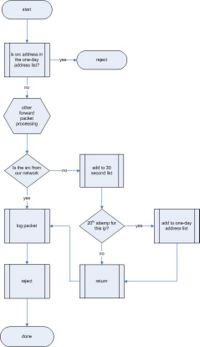 Network administrators are in a constant battle trying to keep attacks from virus infected computers, computers that have been taken over by malicious people and malicious people them selfs. It's a never ending barrage of attacks trying to exploit any flaw in your network possible. I keep a list of hosts/networks that I consider to be "bad-hosts", this is a manual built list and it works great but I don't always have time to sit and watch for candidates for this list, so I created a set of rules to do it for me.

When a packet reaches the bottom of the forward chain it will be rejected, so before it is we will run it through this set of rules.

Here is some names I will be using.