Communications Assistance for Law Enforcement Act requires the routers in USA to have ability to intercept and log network traffic. RouterOS now provides this facility by means of firewall rules. RouterOS can also function as a data retention server if the additional calea package is installed.

sniff policy is enabled by default for "full" and "write" user groups.

The IP Firewall and Interface Bridge now have one additional section,

By selecting either action, the following options will be available:

The calea package provides an additional tool menu - /tool calea, that allows to save certain incoming data streams to a file. The server will create separate files for each packet stream (one data file and one hash file, if configured). The files will not grow indefinitely, but rather util a certain limit, after which a new set of files will be created for that stream. The limit is specified in size and extent of time, whichever is reached first.

Add a rule with the following properties:

Let's assume the particular network configuration, we need to intercept data from 192.168.0.10 Wireless Client and send it to the Calea Server located on Local Network: 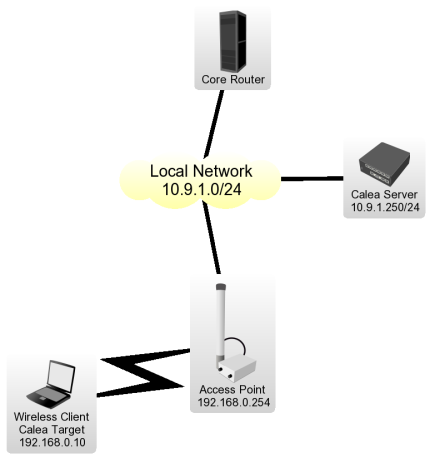 Client Configuration for the Intercept

Wireless Client is connected to Access Point, data interception has to be performed on Access Point for the particular network design.

Intercept-port and case-id should be equal on server and client side, intercept-ip is IP address of the intercepting router (Access Point).