Warning: This manual is moved to https://help.mikrotik.com/docs/display/ROS/CRS3xx+series+switches

The main VLAN setting is vlan-filtering which globally controls vlan-awareness and VLAN tag processing in the bridge. If vlan-filtering=no, bridge ignores VLAN tags, works in a shared-VLAN-learning (SVL) mode and cannot modify VLAN tags of packets. Turning on vlan-filtering enables all bridge VLAN related functionality and independent-VLAN-learning (IVL) mode. Besides joining the ports for Layer2 forwarding, bridge itself is also an interface therefore it has Port VLAN ID (pvid).

Note: Since RouterOS v6.41 all VLAN switching related parameters are moved to the bridge section. On CRS3xx series devices VLAN switching must be configured under the bridge section as well, this will not limit the device's performance, CRS3xx is designed to use the built-in switch chip to work with bridge VLAN filtering, you are able to achieve full non-blocking wire-speed switching performance while using bridges and bridge VLAN filtering. Make sure that all bridge ports have the "H" flag, which indicates that the device is using the switch chip to forward packets. 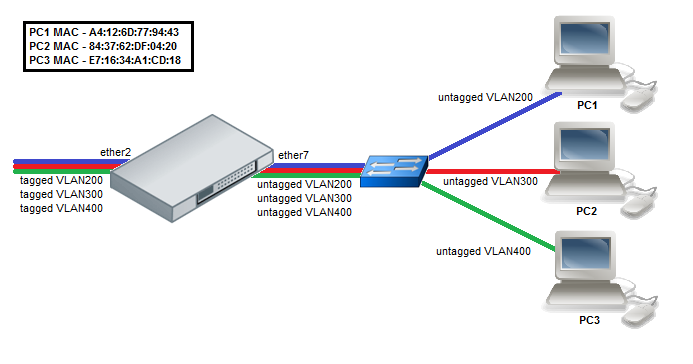 Note: The CRS3xx Switch Rule table is used for MAC Based VLAN functionality, see this table on how many rules each device supports.

Note: The CRS3xx Switch Rule table is used for Protocol Based VLAN functionality, see this table on how many rules each device supports.

Since RouterOS v6.43 it is possible to use a provider bridge (IEEE 802.1ad) VLAN filtering and hardware offloading at the same time on CRS3xx series switches. The configuration for CRS3xx switches is described in the Bridge VLAN Tunneling (Q-in-Q) section.

It is possible to translate a certain VLAN ID to a different VLAN ID using ACL rules on an ingress port. In this example we create two ACL rules, allowing a bidirectional communication. This can be done by doing the following:

CRS3xx series switches are capable of running STP, RSTP and MSTP on a hardware level. For more detailed information you should check out the Spanning Tree Protocol manual page.

Since RouterOS v6.42 all CRS3xx series switches support hardware offloading with bonding interfaces. Only 802.3ad and balance-xor bonding modes are hardware offloaded, other bonding modes will use the CPU's resources. You can find more information about the bonding interfaces in the Bonding Interface section. If 802.3ad mode is used, then LACP (Link Aggregation Control Protocol) is supported.

This interface can be added to a bridge alongside with other interfaces:

Note: Don't add interfaces to a bridge that are already in a bond, RouterOS will not allow you to add an interface that is already a slave to a bridge as there is no need to do it since a bonding interface already contains the slave interfaces.

Make sure that the bonding interface is hardware offloaded by checking the "H" flag:

Layer3 hardware offloading (otherwise known as IP switching or HW routing) will allow to offload some of the router features on to the switch chip. This allows to reach wire speeds when routing packets, which simply would not be possible with the CPU.

At the moment of writing this article, only CRS317-1G-16S+ supports L3 HW Offloading and RouterOS v7beta6 or newer must be used.

The feature can be enabled with:

Note: After turning off HW Offloading it is recommended to reboot the switch, to make sure that all HW related config is cleared from switch chip.

Since RouterOS v6.43 it is possible to create a Private VLAN setup on CRS3xx series switches, example can be found in the Switch chip port isolation manual page.

CRS3xx series switches are capable of using IGMP Snooping on a hardware level. To see more detailed information, you should check out the IGMP Snooping manual page.

CRS3xx series switches are capable of using DHCP Snooping with Option 82 on a hardware level. To see more detailed information, you should check out the DHCP Snooping and DHCP Option 82 manual page.

Mirroring lets the switch 'sniff' all traffic that is going in a switch chip and send a copy of those packets out to another port (mirror-target). This feature can be used to easily set up a 'tap' device that allows you to inspect the traffic on your network on a traffic analyzer device. It is possible to set up a simple port based mirroring where, but it is also possible to setup more complex mirroring based on various parameters. Note that mirror-target port has to belong to same switch. (See which port belong to which switch in /interface ethernet menu). Also mirror-target can have a special 'cpu' value, which means that 'sniffed' packets will be sent out of switch chips cpu port. There are many possibilities that can be used to mirror certain traffic, below you can find most common mirroring examples:

Note: Using ACL rules, it is possible to mirror packets from multiple ports interfaces. Only ingress packets are mirrored to mirror-target interface.

Note: The CRS3xx Switch Rule table is used for QoS functionality, see this table on how many rules each device supports.

Since RouterOS v6.42 it is possible to enable traffic storm control on CRS3xx series devices. A traffic storm can emerge when certain frames are continuously flooded on the network. For example, if a network loop has been created and no loop avoidance mechanisms are used (e.g. Spanning Tree Protocol), broadcast or multicast frames can quickly overwhelm the network, causing degraded network performance or even complete network breakdown. With CRS3xx series switches it is possible to limit broadcast, unknown multicast and unknown unicast traffic. Unknown unicast traffic is considered when a switch does not contain a host entry for the destined MAC address. Unknown multicast traffic is considered when a switch does not contain a multicast group entry in the /interface bridge mdb menu. Storm control settings should be applied to ingress ports, the egress traffic will be limited.

Note: The storm control parameter is specified in percentage (%) of the link speed. If your link speed is 1Gbps, then specifying storm-rate as 10 will allow only 100Mbps of broadcast, unknown multicast and/or unknown unicast traffic to be forwarded.

Since RouterOS v6.41 it is possible to offload certain MPLS functions to the switch chip, the switch must be a (P)rovider router in a PE-P-PE setup in order to achieve hardware offloading. Setup example can be found in the Basic MPLS setup example manual page.

Note: Currently only CRS317-1G-16S+ and CRS309-1G-8S+ using RouterOS v6.41 and newer are capable of hardware offloading certain MPLS functions. CRS317-1G-16S+ and CRS309-1G-8S+ built-in switch chip is not capable of popping MPLS labels from packets, in a PE-P-PE setup you either have to use explicit null or disable TTL propagation in MPLS network to achieve hardware offloading.

Access Control List contains of ingress policy and egress policy engines. See this table on how many rules each device supports (limited by RouterOS). It is advanced tool for wire-speed packet filtering, forwarding and modifying based on Layer2, Layer3 and Layer4 protocol header field conditions.

Note: ACL rules are checked for each received packet until a match has been found. If there are multiple rules that can match, then only the first rule will be triggered. A rule without any action parameters is a rule to accept the packet.

Note: For VLAN related matchers or VLAN related action parameters to work, you need to enable vlan-filtering on the bridge interface and make sure that hardware offloading is enabled on those ports, otherwise these parameters will not have any effect.

It is possible to limit allowed MAC addresses on a single switch port on CRS3xx series switches. For example, to allow 64:D1:54:81:EF:8E start by switching multiple ports together, in this example 64:D1:54:81:EF:8E is going to be located behind ether1.

Since RouterOS 6.43 it is possible to load, save and reset SwOS configuration, as well as upgrade SwOS and set an IP address for the switch by using RouterOS.

Note: Configuration will be saved on the same device with swos.config as filename, make sure you download the file off your device since the configuration file will be removed after a reboot.

Note: The upgrade command will automatically install the latest available SwOS version, make sure that your device has access to the Internet in order for the upgrade process to work properly.